These  pair of seventy year old solid English oak gates were in need of some sympathetic restoration to the bottom rails and styles .

Wet rot had seriously damaged the bottom rails and to such an extent had caused structural failure to the mortise and tenon joints at the bottom of the styles. I was left with no choice but to  completely replace the bottom rails with air dried oak and then scarf  joint new sections onto the ends of the styles with hidden Oak pins used to strengthen the joints .

New mortise and tenons were made exactly how the old ones were formed using oak dowels that were draw bored to pull up the shoulders of the tenons. 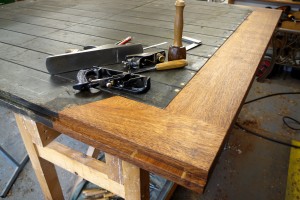 The ends of the tongue and groove boarding had to re-fixed with stainless steel screws that had been counterbored first and Oak pellets inserted over the top of the screws and cleaned off flush.

The gates were extremely well made seventy years ago and all the joinery restoration work I carried out was done using the same traditional methods. The gates are constructed from 60mm thick solid English Oak and are over 6ft high and wide each gate which makes them immensely heavy and takes two people to lift one of them.

But definitely well worth restoring as to make these gates from new as they would have been decades ago and also with the cost of English Oak now would cost quite a few thousand pounds so it was economically viable to restore and save these gates.